When immigrants come to America, they bring their cultures and traditions with them, adding to the complexity of the city and creating ethnic enclaves. However, their arrival also presents challenges in acculturation. This piece will outline how an everyday object can narrate a rich history. The object you see here, now on display as part of the New York at Its Core exhibition, is on loan to the Museum from the Lower East Side appetizing store Russ & Daughters. It helps illustrate a massive shift in immigration patterns during the early industrial city by serving – and literally feeding – an entire New York community. 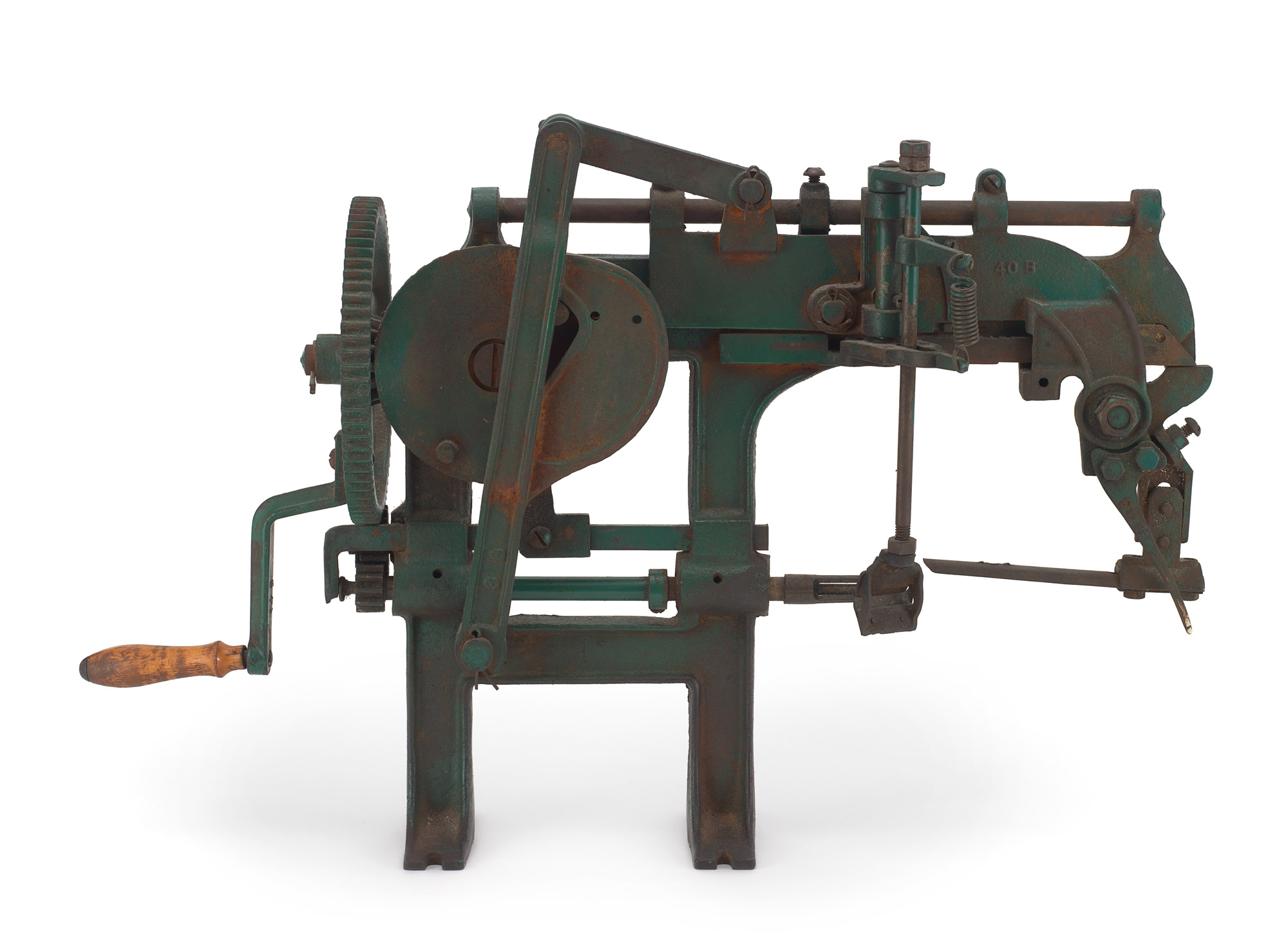 In 1907, Joel Russ joined the 2.5 million Jewish immigrants from Eastern Europe who had made their way to the United States beginning in the late 19th century. Russ hailed from the town of Strzyzow in the Subcarpathian region, what was then part of Austria-Hungary and is now Poland. He became part of a monumental migration in which one-third of the Jewish people from the Austro-Hungarian and Czarist Empires sought to escape poverty by coming to America, and New York in particular. Half of these women and men found employment in the garment industry, sewing clothes in sweatshops and factories. However, some immigrants decided to make their living by starting small businesses that catered to their fellow Jewish immigrants who settled primarily on the Lower East Side, the labyrinth of streets below Houston and abutting the East River. Of those businesses, the ones that sold distinctively Jewish-style foods provided a particularly good path to economic success.

The humble herring lay at the heart of Joel Russ's food business, as reflected in the shop's iconic sign: an image of the leaping fish.

Shortly after his arrival in New York, Russ acquired a wooden barrel from which to sell herring on the sidewalks, catering to the women and men who lived on the adjoining streets. In a few years, he graduated to selling from a horse and cart, and by 1914 opened J. Russ International Appetizers on Orchard Street - one of the bustling commercial arteries of the Lower East Side. In 1920, Russ moved operations to Houston Street and then renamed the business Russ & Daughters in 1933, a nod to the fact that he had no sons and that his daughters Anne, Ida, and Hattie worked by his side, along with his wife Bella.

The humble herring lay at the heart of Joel Russ’s food business, as reflected in the shop’s iconic sign: an image of the leaping fish. Herring was relatively cheap and therefore a regular part of the diet of the working class in Europe and America. It abounded in the shallow banks of the cold waters of the Baltic, and merchants brought it long distances to Jewish consumers throughout eastern Europe. It could be eaten in many forms and for many poor Jews, who rarely ate meat, it provided an essential source of protein. It also needed no refrigeration for storage and could be consumed with relatively little preparation.

For Jews, herring had a particular advantage beyond its low cost and easy handling. As a fish, it fell into the kosher category of pareve, or neutral. Fish, according to Jewish law, was neither meat nor dairy, the two types of foods that need to be consumed and prepared separately. As such, a piece of herring could be eaten alongside cheese or cream, or as a first course or accompaniment to the infrequent meals that included meat.

An incredibly versatile food, herring lent itself to various manner of preparation by many cultures around the world. Jewish consumers, like those who bought from Joel Russ and the dozens of other appetizing stores on the Lower East Side, partook of it steeped in brine, swimming in sour cream, baked, or smoked. It might constitute a full meal in and of itself, or perhaps served with potatoes, raw onions, or rye bread. On more festive occasions, like the weekly Sabbath feast, it appeared on Jewish tables as a first course, known as a forshpays in Yiddish, which literally means a “pre-taste.”

In America, food was much less expensive than in Europe and working-class families ate a richer and more varied diet than they had before. Thus, the herring of “back home” moved from being a full meal to becoming a prelude to a heartier lunch or dinner. One form of herring preparation maintained a particularly special place in the weekly cycle of meals: chopped herring.

For Jewish residents of the Lower East Side and equivalent immigrant Jewish neighborhoods around the United States, chopped herring held an important place as a first course in the weekly Sabbath meal. It offered a rich and complex taste, which would “wake up” the taste buds of those sitting around the table as they anticipated the meal to follow: a traditional menu of challah (egg bread), chicken soup, roasted chicken, kugel (baked pudding), and stewed fruit.  A mainstay of Russ & Daughters, chopped herring was a combination of the tangy fish, vinegar, oil, onions, and hard-boiled eggs, as well as sugar and apple that was cored, peeled, and chopped up finely into the mix. The apple, along with the sugar, set off the vinegar and the fish itself, offering a sweet and sour taste that is celebrated in many food cultures to stimulate the appetite and prepare for the meal to come.

This is how the apple peeler and corer became a crucial part of the Russ & Daughters family business. This intriguing, useful machine made it possible to churn out the delicious and highly sought-after foods the shop purveyed and produce vats of chopped herring on a daily basis. The owners and their future employees used the equipment to perform two tasks at a single time: remove both the apple’s skin and its core. The apple peeler and corer prepared an essential ingredient for Lower East Side families, and later, shoppers from around the city and the world, to feast on this highly appetizing dish.

We asked the author, why study history?

History opens windows, allowing us to explore our own past as we travel into the worlds of others. A broadly human experience, thinking about history gives us all a chance to study the worlds we come from and bring us into contact with people and places whose experiences may seem so different than our own. These journeys in and out of the familiar and the unfamiliar make us fuller, richer, more interesting human beings.

A scholar of American Jewish and American immigration history, Hasia Diner is a member of the Department of History and the Skirball Department of Hebrew and Judaic Studies. Author of numerous books in her field, she won a Guggenheim fellowship in 2011.

High on a shelf of the legendary Russ & Daughters Appetizing store was an object that perfectly encapsulated the story of New York at Its Core, and a tool that helped launch a 100-year old business.
Movements and Causes Monday, November 7, 2016

With its cheeky title, Occupied Wall Street Journal hopped off the printing press and into Zuccotti Park in Lower Manhattan roughly one month after the Occupy Wall Street encampment popped up on September 17, 2011.
City Artifacts Monday, November 14, 2016

A close reading of the ceremonial Lenape Club, one of the many fascinating objects featured in our New York at its Core exhibition.
See All