Future City Lab: Getting Around

How can we reduce gridlock in New York City? 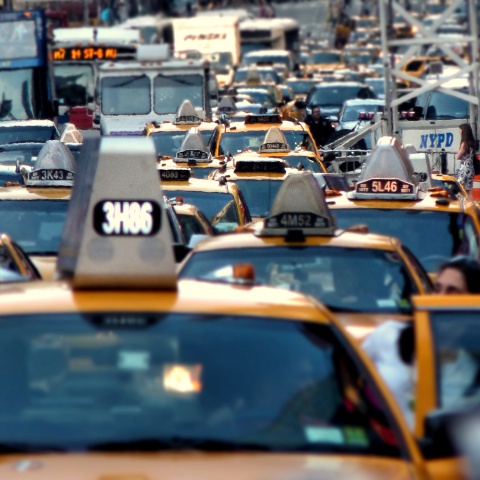 Connection to Future City Lab: Getting Around: How can we make it easier for people to get into and around the city?

Speaking and Listening 1. Engage effectively in a range of collaborative discussions (one-on-one, in groups, and teacher-led) with diverse partners on grade 5 topics and texts, building on others’ ideas and expressing their own clearly. (Also 1b 1c, 1d, 1e.)

In this lesson, students will be introduced to the historical reasons for New York City’s grid and oriented to the challenge of city planning and problem-solving. Then, after thinking through some of the transportation challenges that face the city today, they will do their own research and advocate for a strategy that can help mitigate gridlock.

Before presentation, ask: What do you imagine the island of Manhattan looked like when the Dutch first arrived and established New Amsterdam in 1624?  What types of paths or roads might have existed?

Show Slide 1, The Castello Plan of 1660. Ask: Why did the Dutch settle at the tip of Manhattan Island?  What were the transportation needs as New Amsterdam grew and became New York?  What items had to be moved? (Note: The wall on the right-hand side is located at present-day Wall Street.)

Show Slides 2 and 3, The Ratzer Plan of 1766-1767. What do you notice? What does the landscape look like? What types of transportation might be needed now? (Students should by now be able to see the agricultural use both in Manhattan and the surrounding area, and also note that the city is still confined to the tip of the island.)

Show Slide 4, New York City in 1808. What has happened to the streets now? (Students should be able to discern grid-like patterns, but note that they don’t match up at key places. How does that impact getting around the city? Remind students that there were no smartphones with GPS, nor traffic lights to organize traffic flow!)

Show Slide 5, Quote from Washington Irving. How do we know that it was difficult moving through the city? (Encourage students not to get bogged down on language, but think rather how the jumbled syntax and nonsensical words help mimic the state of things in New York before the institution of gridded streets.)

Show Slide 6, Commissioners Plan of 1811. What might be the reasoning for the grid-like development of NYC as the city grew into the 19th century? Have students use spatial reasoning to think why straight streets and predictable numbering systems are important.

Slide Show Conclusion: Students should understand that New York’s gridded streets were the result of careful planning, in which a top-down commission was empowered by the city government to solve a key problem of moving around the city. This transition is key as we ask students to think of themselves as problem-solvers: how can we solve the problem of gridlock today? What steps need to be taken and who should direct them? (Note: Making the Grid a reality was far from peaceful. For more details, see the Museum’s “Greatest Grid” online exhibition.)

1.) How do students get to school?  How do their parents get to work / school? What are the challenges of moving around the city? (Student answers might include cars, delivery trucks, traffic, gridlock, crowds, etc.)

2.) Let’s focus on above-ground transport. What are the causes of too much traffic on our streets?

Students begin to identify problems and be prepared to come up with solutions.

Have students view real-time traffic conditions in New York, both for reference and to let them know how the city is constantly monitoring traffic as it gathers information (zoom in for live camera feeds): http://dotsignals.org/

Ask: What are some of the transportation needs we face now to move goods and people in and around New York City?  How can we meet these needs as our city continues to grow?

Guide students to identify three to five key ideas that are currently being floated to help mitigate gridlock. These might include (but are not necessarily limited to, especially if you’re aware of a related initiative in your area):

Divide students into groups and assign them a key idea. Have them do research into the pros and cons and evaluate how effective their strategy might be on a citywide level. The last slide of the presentation has the following prompts:

1.) Who needs to cooperate to make this strategy work?

2.) Who would need to pay to make this happen, and how much?

3.) How long do you think it would take before the strategy could be effective?

4.) Is the strategy more effective in some boroughs than others?

5.) Are there any safety considerations that would need to be addressed?

Have students share out at the end of the class period.

Fieldtrips: This content is inspired by the Port City, 1609-1898 and Future City Lab galleries in the Museum’s flagship exhibition, New York at Its Core. If possible, consider bringing your students on a fieldtrip! Visit http://mcny.org/education/field-trips to find out more.

This project was made possible in part by the Institute of Museum and Library Services.

The views, findings, conclusions or recommendations expressed in these lessons do not necessarily represent those of the Institute of Museum and Library Services.