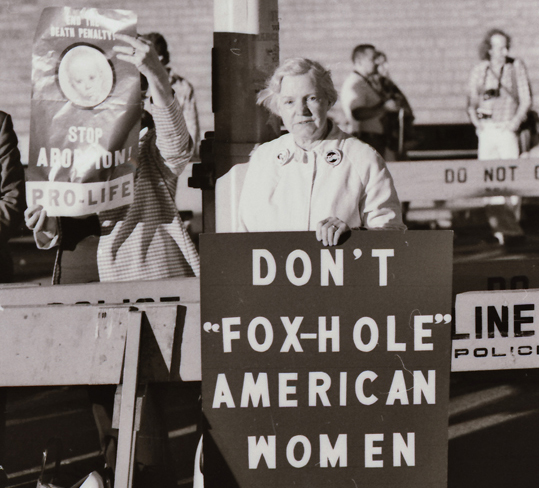 Through analyzing the language, images, and tactics utilized by organizations and individuals who have opposed women’s suffrage,the Equal Rights Amendment (ERA), and feminist electoral politics at various points during the 20th and 21st centuries, students will understand the underlying ideologies that have motivated these groups.

CCSS.ELA-LITERACY.RI.5.3
Explain the relationships or interactions between two or more individuals, events, ideas, or concepts in a historical, scientific, or technical text based on specific information in the text.

Cite strong and thorough textual evidence to support analysis of what the text says explicitly as well as inferences drawn from the text.

New York was at the center of political debates over suffrage: “the battleground of the whole nation,” declared Carrie Chapman Catt. The National Association Opposed to Woman Suffrage was the suffragists’ key opponent. The Association, led first by Josephine Jewell Dodge and then by Alice Hay Wadsworth, the wife of U.S. Senator from New York James W. Wadsworth, Jr., had its headquarters at West 39th Street in Manhattan. Like their counterparts in the pro-suffrage movement, anti-suffrage activists marketed their own buttons and souvenirs, including this playing card. 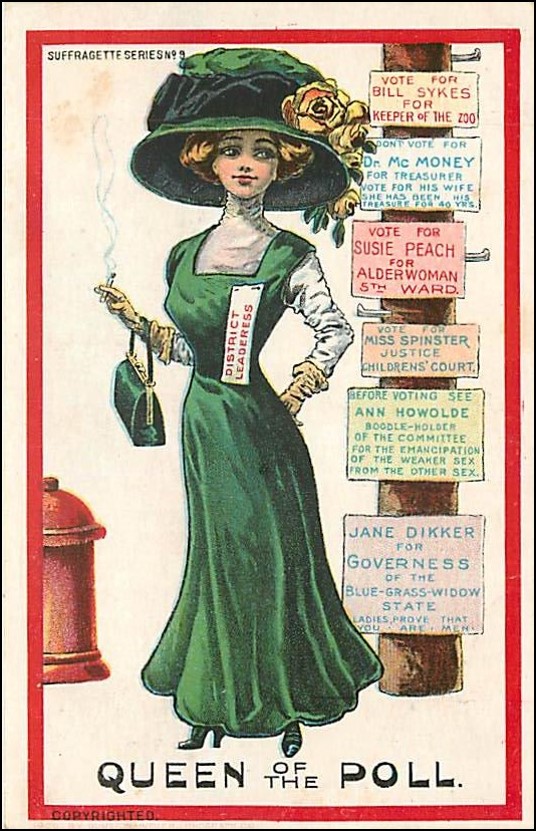 The National Woman’s Party first introduced the Equal Rights Amendment to Congress in 1923. New York suffragists—like many feminists—split over whether the ERA would ultimately help or hurt women, with opponents to the amendment arguing that it would eliminate the special protections for working women they had fought so hard to win.

As part of the larger women’s liberation movement of the 1960s and 70s, women in New York helped lead the renewed fight for the ERA. In 1972 Congress approved the Amendment and when it returned to the states for ratification, New York State also approved it. However, anti-ERA campaigns also gained traction during the 1970s.

The anti-ERA campaign was part of a conservative backlash to the women’s liberation movement. Abortion in particular—more politicized than ever in the wake of Roe v. Wade—created division, with those opposed to the ERA arguing that it would force the federal government to fund abortions. Women like Phyllis Schlafly, a constitutional lawyer and conservative activist who led the campaign against the ERA’s national passage with her organization STOP (Stop Taking Our Privilege) ERA, opposed gender equality and believed in separate roles for men and women in society. The ERA, Schlafly declared, would not only lead to more women in the workplace, but to same-sex marriage, women in combat, government-funded abortion, and even unisex toilets.

The two images below illustrate the conservative backlash against the ERA and the women’s liberation movement of the 1970s. On the left, a woman protests against the ERA outside the 1976 Democratic National Convention at Madison Square Garden. The photograph was captured by Jo Freeman, a pro-ERA activist. The image on the right was taken by freelance photographer Richard Busch in 1974 on Fifth Avenue in midtown New York. 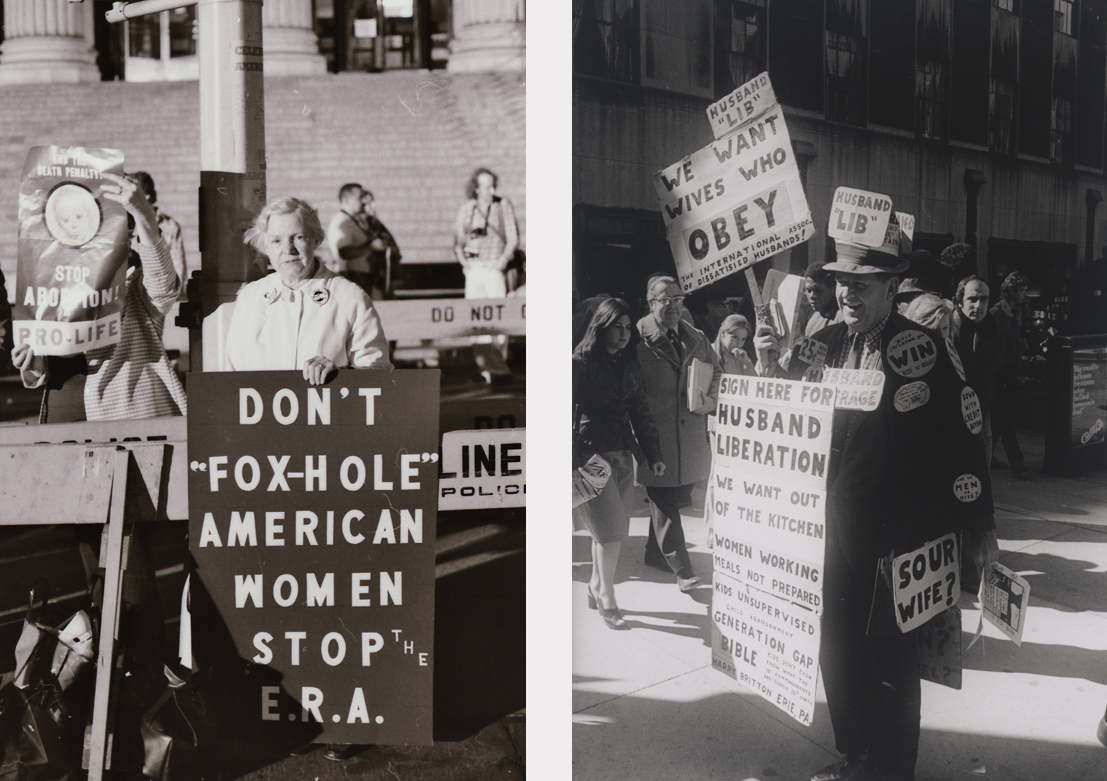 Since pioneering Wall Street banker and women’s rights advocate Victoria Woodhull first ran for the presidency in 1872—long before the passage of the 19th Amendment—New York women have sought the nation’s highest office. In 2016, Hillary R. Clinton, former First Lady, senator from New York, and Secretary of State, won the Democratic Party’s nomination for president. Though Clinton avoided dwelling on the challenges of being a woman candidate, her opponents accused her of “playing the woman card.” Her campaign released this “woman card” in response. While the card reads “Congratulations! You’re in the majority,” the back details the reality that women often face lower wages, higher healthcare costs, minimal parental leave, and challenges to abortion access. The card also urges women to “head to the polls and elect our first woman president.” 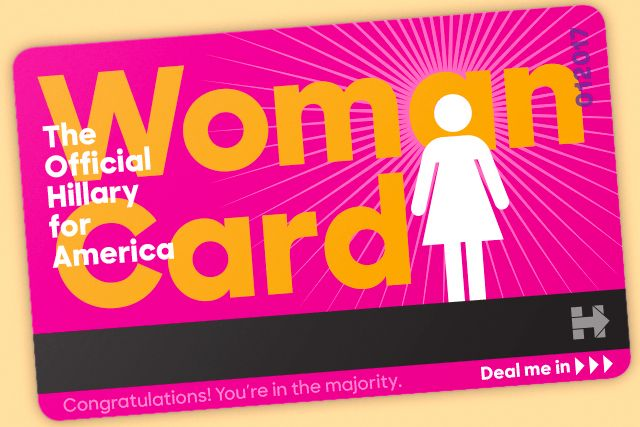 In the aftermath of the 2016 presidential election, many New York women participated in a fervent resistance movement to the new administration of New Yorker Donald Trump, deploying the political methods of the city’s foremothers to confront what they identified as a rising tide of misogyny and discrimination. The increased political visibility of gender issues energized New York women in both the leadership and the rank and file of organizations focusing on increased rights and protections for women, children, and people of color.

On January 21, 2017, women and men from New York and around the world took to the streets in Washington, DC and numerous other cities to protest the inauguration of Donald Trump and to demonstrate for women’s rights. In New York City, where this photo was taken, the march drew 400,000 participants. 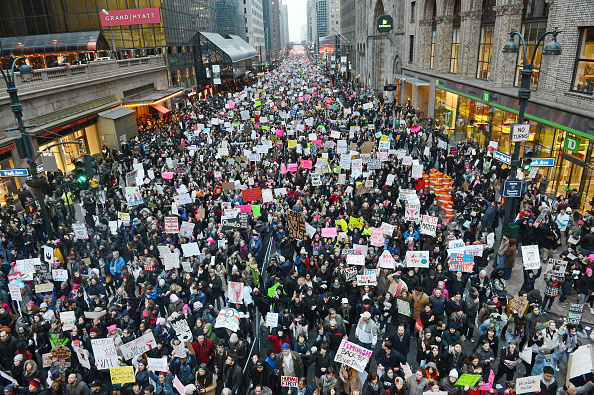 In this exercise, students will read an excerpt of Phyllis Schlafly’s 1972 essay, “What’s Wrong with ‘Equal Rights’ for Women?” and consider the many issues and debates around the ERA. Originally published in her newsletter, the essay soon became one of the regular speeches Schlafly gave on the campaign trail as she and fellow members of STOP ERA argued against the federal amendment.

Step 1: Ask students to consider the following questions as they read the primary document below:

Step 2: Ask students to put themselves in the position of a pro-ERA activist who is speaking after Schlafly at a rally. They will need to write a speech that responds to Schlafly in two ways. The speech should:

Step 3: Ask student to debrief about what they learned from writing their speeches. What tactics did they rely upon to persuade others? Were there any parallels between Schlafly’s arguments and those made by the anti-suffragists? Were there any similarities between their reasons to support the ERA and the arguments made in resources 4 and 5?

“The Fraud of the Equal Rights Amendment”

from “What’s Wrong with ‘Equal Rights’ for Women?” by Phyllis Schlafly, 1972.

In the last couple of years, a noisy movement has sprung up agitating for “women’s rights.” Suddenly, everywhere we are afflicted with aggressive females on television talk shows yapping about how mistreated American women are, suggesting that marriage has put us in some kind of “slavery,” that housework is menial and degrading, and—perish the thought—that women are discriminated against. New “women’s liberation” organizations are popping up, agitating and demonstrating, serving demands on public officials, getting wide press coverage always, and purporting to speak for some 100,000,000 American women.

It’s time to set the record straight. The claim that American women are downtrodden and unfairly treated is the fraud of the century. The truth is that American women never had it so good. Why should we lower ourselves to “equal rights” when we already have the status of special privilege?

The proposed Equal Rights Amendment states: “Equality of rights under the law shall not be denied or abridged by the United States or by any state on account of sex.” So what’s wrong with that? Well, here are a few examples of what’s wrong with it. This Amendment will absolutely and positively make women subject to the draft. Why any woman would support such a ridiculous and un-American proposal as this is beyond comprehension. Why any Congressman who had any regard for his wife, sister or daughter would support such a proposition is just as hard to understand. Foxholes are bad enough for men, but they certainly are not the place for women—and we should reject any proposal which would put them there in the name of “equal rights.”
...
Another bad effect of the Equal Rights Amendment is that it will abolish a woman’s right to child support and alimony, and substitute what the women’s libbers think is a more “equal” policy, that “such decisions should be within the discretion of the Court and should be made on the economic situation and need of the parties in the case.”

Under present American laws, the man is always required to support his wife and each child he caused to be brought into the world. Why should women abandon these good laws—by trading them for something so nebulous and uncertain as the “discretion of the Court”?

The law now requires a husband to support his wife as best as his financial situation permits, but a wife is not required to support her husband (unless he is about to become a public charge). A husband cannot demand that his wife go to work to help pay for family expenses. He has the duty of financial support under our laws and customs. Why should we abandon these mandatory wife-support and child-support laws so that a wife would have an “equal” obligation to take a job?

By law and custom in America, in case of divorce, the mother always is given custody of her children unless there is overwhelming evidence of mistreatment, neglect or bad character. This is our special privilege because of the high rank that is placed on motherhood in our society. Do women really want to give up this special privilege and lower themselves to “equal rights”, so that the mother gets one child and the father gets the other? I think not.

Freedman, Estelle B. No Turning Back: The History of Feminism and the Future of Women. New York, NY: Random House, Inc., 2002.

Green, Emma. “America’s Profound Gender Anxiety: Outrage over transgender bathroom use is just the beginning of a long conflict over what it means to be men and women.” The Atlantic, May 31, 2016.

Aitkenhead, Decca. “Hillary Clinton meets Mary Beard: ‘I would love to have told Trump: “Back off, you creep.”’” The Guardian, December 2, 2017. https://www.theguardian.com/lifeandstyle/2017/dec/02/hillary-clinton-mary-beard-donald-trump

This content is inspired by the exhibition Beyond Suffrage: A Century of New York Women in Politics. If possible, consider bringing your students on a field trip by July 2018! Find out more.

Education programs in conjunction with Beyond Suffrage: A Century of New York Women in Politics are made possible by The Puffin Foundation Ltd.