Beyond Suffrage Lesson: Running for Office 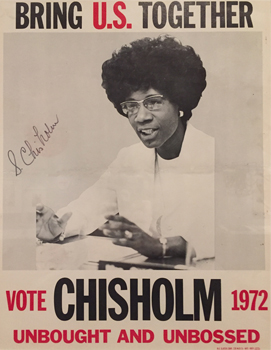 Students will consider why women have chosen to run for office against historical barriers as a means to influence change from within and outside the government. Through viewing primary sources, students will examine how activists and politicians like Pauli Murray, Bella Abzug, and Shirley Chisholm have organized around key issues and used specific campaign strategies to run for office.

CCSS.ELA-LITERACY.RI.5.2
Determine two or more main ideas of a text and explain how they are supported by key details; summarize the text.

CCSS.ELA-LITERACY.RH.6-8.6
Identify aspects of a text that reveal an author’s point of view or purpose.

CCSS.ELA-LITERACY.RH.11-12.7
Integrate and evaluate multiple sources of information presented in diverse formats and media (e.g., visually, quantitatively, as well as in words) in order to address a question or solve a problem.

1925: Republican Party activist Ruth Sears Baker Pratt becomes the first woman elected to the city’s Board of Alderman; four years later she is the first New York woman to win a seat in Congress

1937: After New York’s local government is restructured and the City Council replaced the Board of Alderman, 14 women run for City Council; one, Genevieve Earle, is elected.

1941: Socialist candidate Gertrude Klein is elected to City Council from the Bronx; there are now three women on the City Council.

1949: Lawyer Pauli Murray loses her bid for City Council, but continues to be an important legal activist on civil rights issues and women’s rights.

1953: Civil Rights organizer Ella Baker runs for City Council on the Liberal Party ticket and loses; afterward she contributes to the civil rights movement in the south and to school boycotts in New York.

1955: Bessie Buchanan becomes the first black woman in office in New York when she is elected to the 12th District of the State Assembly.

1968: Shirley Chisholm becomes the first black woman elected to Congress. She also runs for President in 1972.

1970: Bella Abzug is elected to the House of Representatives; she is one of twelve women and the first Jewish woman from New York to serve in Congress.

1978: Olga Méndez becomes the first Puerto Rican woman in the nation to be elected to a state legislature; Susan Alter became the first Orthodox Jewish woman elected to the City Council

1991: Dr. Una S. T. Clarke becomes the first Jamaican-born woman elected to the City Council; she is succeeded by her daughter, Yvette Clark, in 2001.

1999: Christine Quinn is elected to City Council; in 2006 she became the first openly-gay Speaker of the City Council.

The decades between the early 20th-century suffrage movement and the so-called “second wave feminism” of the women’s liberation movement of the 1960s and 70s have often been viewed as a dry spot in women’s politics. But in New York, this was a period of sometimes quiet but significant gains by a generation of women who became skilled at navigating the political system from the inside—as voters, behind-the-scenes political operatives and policymakers, and eventually politicians.

As New York and the nation emerged from the national emergencies of the Depression and the Second World War, new opportunities and challenges arose. A generation of women on the political left who had worked in New Deal programs and viewed government as a solution to poverty— particularly a close-knit network of black women socialists — began running for office themselves. Women such as Pauli Murray and Ella Baker now approached gender hand-in-hand with race and class, critiquing the limits of liberalism and challenging the established powerbrokers by running against incumbents or on third-party tickets. While the more radical candidates lost, by the 1950s black women were entering New York government in larger numbers than ever before.

By the 1960s and 1970s, a generation of political women who participated in the women’s liberation movement also ran for office in New York. Officials such as Bella Abzug and Shirley Chisholm represented New York at the national level, while Carol Bellamy and Constance Baker Motley broke barriers for women in city government. The “glass ceiling” in politics remained, however: women lost as many races as they won, and their very presence rankled colleagues and voters in a system that still viewed female politicians as anomalies.

Once in office, the victors often sought to improve the lives of women through expanded government services and legislation in support of gender equality. Their political campaigns, from New York Borough President to President of the United States, inspired a new generation of women to run for office. Abzug and Chisholm, along with pioneering feminist activists Betty Freidan and Gloria Steinem founded the National Women’s Political Caucus in 1971.

Countless New York women have won political campaigns in the years since, from City Council Speaker and Public Advocate at the local level, to nominee for President of the United States. Yet their failure to win the highest executive offices—mayor, governor, or president—has underscored the notion that women do not always vote for other women, and that becoming political insiders and gaining political power are not one and the same. While equality in its many forms has proved elusive, a diverse range of New York women continue both to critique the past and to take inspiration from it when they vote, run for office, and work for change within government and outside of it.

Using the slogan “good government is good housekeeping,” Pauli Murray ran for City Council in 1949 on the Liberal Party ticket. One of the few African-American women lawyers in New York, and with a background in civil rights activism, Murray came in second only to the Democratic Party contender. She never ran for office again; instead she forged a multifaceted career as a lawyer, writer, and priest. Her work helped add “sex” as a protected category to the Civil Rights Act of 1964, and, with Dorothy Kenyon, she influenced the Supreme Court’s 1975 decision requiring women’s jury service. 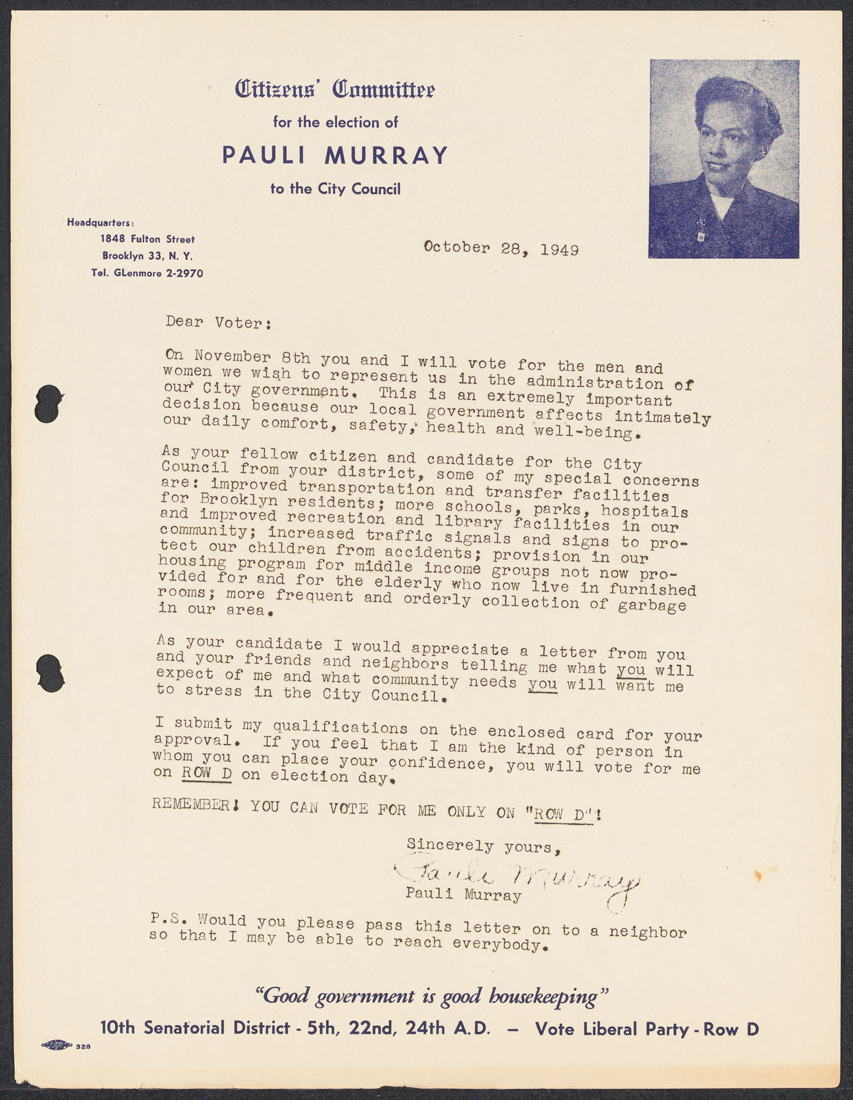 Bella Abzug was a lawyer, peace activist, feminist, a staunch supporter of the Equal Rights Amendment (ERA), and a New York icon. Abzug’s participation in the women’s movement proved a natural progression from her lifelong background in progressive politics. The Bronx native and daughter of immigrants made her mark defending tenants’ legal rights and protesting the war in Vietnam before running for office. In 1970 the boisterous and flamboyant “Battling Bella,” as she became known, ran on a feminist and peace platform to represent Greenwich Village and the Lower East Side Manhattan in the U.S. House of Representatives. Her election made her one of only 12 women serving in Congress at the time (1971 -1977) and the first Jewish woman from New York to serve. Abzug then set her sights on the Senate in 1976, but she lost by less than one percent of the vote. She then ran for mayor in 1977— making her the second woman, behind Olive Malmberg Johnson (who ran as a Socialist in 1929), to run for mayor of New York City—but lost in the Democratic primary to Ed Koch. In her final years, Abzug founded the Women’s Environment & Development Organization at the UN and remained a spokesperson for women's rights worldwide.

Bella Abzug was known for her large hats and even larger personality. According to Abzug herself, “Working women wore hats. It was the only way they would take you seriously. After a while I started liking them. When I got to Congress, they made a big thing of it. They did not want me to wear a hat. So I did.” In this 1975 speech to the National Congress of Neighborhood Women—an organization founded in Brooklyn by Jan Peterson—Bella Abzug emphasizes her own working-class background and the centrality of class to the women’s movement. The film by Petersen and Christine Noschese documents the National Congress of Neighborhood Women’s first conference in Washington, D.C. Watch a video clip of Bella Abzug speaking:

Brooklyn native Shirley Chisholm was active in Democratic Party clubs in her Bedford-Stuyvesant neighborhood before running successfully for the State Assembly in 1964. In 1968 she defied party leaders by insisting on running for a seat in the U.S. House of Representatives—a campaign she won. As the first black woman in Congress, Chisholm was immersed in the women’s and civil rights movements and pursued legislation to help the politically disempowered: women, the poor and working class, and people of color. In 1972 Congresswoman Chisholm became the first African American—and first woman—to seek the presidential nomination on a major party ticket.

In Shirley Chisholm’s historic presidential announcement speech, she proclaimed, “I am not the candidate of black America, although I am black and proud. I am not the candidate of the women’s movement of this country, although I am a woman and I’m equally proud of that.” Her platform included improvements to maternity leave, daycare, minimum wage, public housing, and education, as well as the legalization of abortion and an end to sex discrimination. The campaign slogan Congresswoman Shirley Chisholm used in her run for President— “unbought and unbossed”—distinguished her as a candidate who hadn’t “sold out” to her party’s establishment. 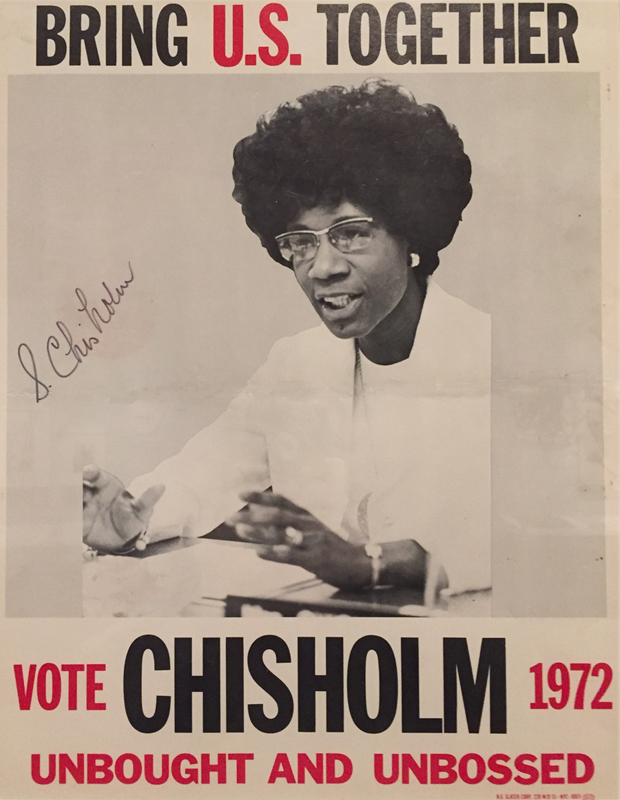 Recently, the Women’s Caucus of the City Council launched a campaign called “21 in ‘21” to help support women running for City Council. The aim is to have 21 women serving on the Council by 2021.

In part 1 of the activity, learn about your City Council member. Using the City Council’s website, find out:

--What is your district?

--Who is your City Council member?

--What is your City Council member’s platform?

This content is inspired by the exhibition Beyond Suffrage: A Century of New York Women in Politics. If possible, consider bringing your students on a field trip by July 2018! Find out more.

Education programs in conjunction with Beyond Suffrage: A Century of New York Women in Politics are made possible by The Puffin Foundation Ltd.