Civil Defense During the Cold War

In May 2017, the Museum’s Manuscripts and Ephemera collection accessioned a 1950s-era Civil Defense kit that was compiled during the Cold War by Mr. Ernest Thomsen, then a resident of Hollis, Queens. Given the current political climate, I took the kit out to discover how the nuclear threat was perceived at the time that Mr. Thomsen served as a Supervisor of the Building Control Unit of the Office of Civil Defense.

The Office of Civilian Defense (OCD) was established by President Franklin Delano Roosevelt in 1941 to prepare and protect the general public in the event of an additional attack on US soil during World War II. Efforts were led primarily by volunteers, who were organized at state, county, city, and block level. “Civilian Protective Groups” consisted of aircraft spotters, air raid wardens, and auxiliary fire fighters and police officers. These groups led blackout drills at three-month intervals, and tested air raid sirens every Saturday at noon. Towards the end of the war, it became clear that a domestic attack was unlikely, and the OCD made plans to sell air raid sirens and close their offices. The Office of Civilian Defense ended operations in June 1945. As tensions rose between the United States and the Eastern Bloc, President Truman again activated the OCD by signing the 1950 US Civil Defense Act, which assigned responsibility for atomic survival plans to state and local authorities.

Reading through the pamphlets contained in the kit and archived New York Times articles, it is clear that the threat of nuclear attack in the United States was perceived and treated as real. The New York City Office of Civil Defense was located on East 55th Street, and it coordinated all matters affecting civil defense and natural disasters. Preparations included “duck and cover” drills at schools, air raid instructions printed in newspapers, designating shelters in basements and subways throughout the city, stockpiling food and supplies, and distributing pamphlets such as “You and the Atomic Bomb”. The city also spent nearly $160,000 on 2.5 million identification bracelets for schoolchildren.

At a 1950 hearing of a Senate Armed Service subcommittee, Mayor Vincent Impellitteri stated that the city would not be evacuated, or its “industries be permitted to slacken because of an actual or threatened enemy attack, including atomic bombing.” He instead asked for financial help to “push subway excavation, construction of strategic arterial highways, and building of general-purpose structures that could serve as shelters in an emergency”, and sited specific projects that lacked funding, including the Second Avenue Subway. Publications, such as “Alert today – alive tomorrow” and “Before disaster strikes… what to do now about emergency sanitation at home” focused on how civilians could prepare themselves and their homes for an attack, rather than on evacuation. 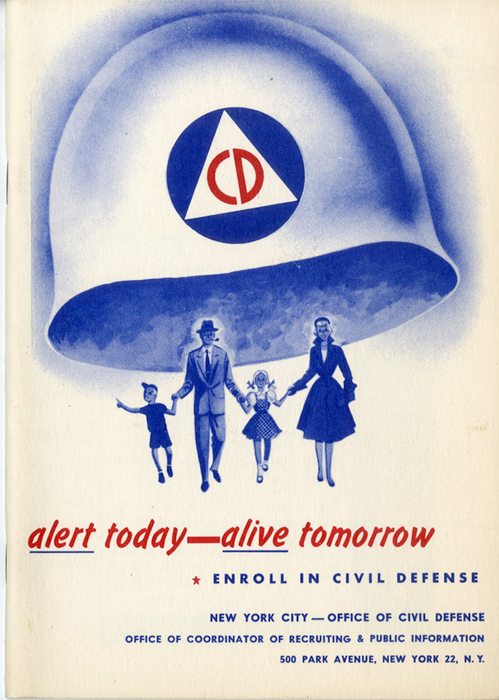 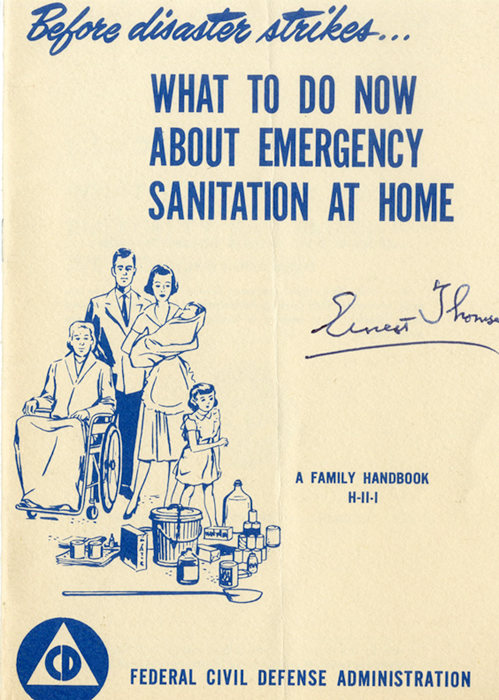 Federal Civil Defense Administration. “Before disaster strikes… What to do Now about Emergency Sanitation at Home”, 1953. Museum of the City of New York. 2017.29.5

Mr. Thomsen was part of the Building Control Unit in Queens, which worked to identify the best shelter area to protect occupants of every building. Materials in the Capitol Metal file box he kept include official Civil Defense publications, such as “Warden’s Manual”, “Building Defense Supervisor’s Manual”, and a highway map of designated Civil Defense routes. It also includes materials created by Mr. Thomsen, such as contact information for other volunteers and two notebooks of meeting notes that date from 1952 to 1955.

Luckily, the Cold War remained cold and threats never materialized. However, the city and its citizens were prepared. In 2006, city workers were conducting a regular inspection of the Brooklyn Bridge, and found a “cold-war-era hoard of water drums, medical supplies, paper blankets, drugs and calorie-packed crackers – an estimated 352,000 of them, sealed in dozens of watertight metal canisters.” The barrels were stamped with the years 1957 (Sputnik launch) and 1962 (Cuban missile crisis), and several had labels from the Office of Civil Defense. I wonder how those crackers would taste today, 60 years later, and hope we never need to find out.

High on a shelf of the legendary Russ & Daughters Appetizing store was an object that perfectly encapsulated the story of New York at Its Core, and a tool that helped launch a 100-year old business.
Behind-the-Scenes Tuesday, August 9, 2016

Jamaica, Queens was home to Rufus King, one of our first senators. Inside his former farmhouse–still standing today–was a medicine chest, and inside the chest….well, you’ll have to read on to find out.
See All